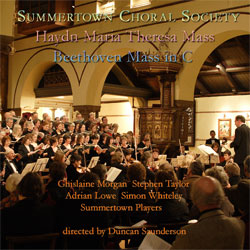 “An exceptionally well-drilled choir, their crisp entries were faultless, their intonation spot on, and their enthusiasm couldn’t be doubted for a moment.”

“The orchestra played with energy and brilliance throughout.”

“There was some thrilling work from the four soloists, whose voices blended exceptionally well – despite the fact that bass Simon Whiteley had stepped in at short notice to replace an indisposed Tom Edwards.”

A recording of this concert is now available to choir members. To obtain a copy, ask any member of the committee or send your request via email to: webmaster@summertownchoral.org.uk.

Summary of the Programme Notes

Both the Masses were commissioned by Haydn’s patron, Prince Nikolaus Esterházy II, to celebrate the name-day of his wife, Princess Maria Hermenegild.

The ‘Maria Theresa’ Mass was the earlier work, first performed on 8th September 1799 and the fourth of the six masses written by Haydn during the years 1796-1802 to celebrate the Princess’ name-day. It appears to have acquired its nickname (Theresienmesse in the German) after a performance a few years later at the court chapel in Vienna of Francis I, Emperor of Austria, in which his wife the Empress Maria Theresa was the soprano soloist.
The Mass in C was first performed on 13th September 1807 and was written during Beethoven’s middle period of prodigious musical activity. Haydn, the most distinguished living composer, died in 1809, and the depth and fullness of his last six masses must have invited critical comparison with the Mass in C. Beethoven himself regarded it highly, but it was not well received by the Count and the musical circles of Vienna, a reaction which is perhaps not surprising in the light of the early reviews of, for example, Beethoven’s 1st and 2nd Symphonies, first performed in 1800 and 1803, which were variously described as ‘inventive’, ‘difficult’, ‘completely extraordinary’, ‘richly furnished with detail’.

The liturgical text of the Mass imposes itself on the structure and style of the music in two ways. The six main elements of the liturgy require a structure of six separate movements for the work as a whole; at the same time the contrasting moods of different sections of the text, particularly in the Gloria and the Credo, demand to be reflected in contrasts of musical colour and mood. The musical contrasts can be so sharp that the sections stand separate from each other within the movement, or they can be marked by gentle modulations from major to minor key and changes in tempo with only a pause in the flow of the music.

The two Masses show this difference of approach. In the ‘Maria Theresa’ Mass the longer movements have clearly contrasting separate sections, conforming to the sections of the text as set out in the synopsis. In the Mass in C, whose synopsis shows the same divisions in the text save for one difference in the Gloria, these movements have similar contrasts of musical mood and colour, but the flow of the music is uninterrupted. Both composers use the soloists to mark the start of a new section, both Masses have fugues at the end of the Credo, and both have strikingly lyrical movements, the Gratias in the ‘Maria Theresa’ Mass, the Benedictus in the Mass in C.
Performing the two Masses alongside each other offers the opportunity to judge how close was any affinity between the work of Haydn and Beethoven. The Viennese audience of 1807 may have been more loyal to the familiar and more comfortable music of Haydn. We, who know the Missa Solemnis of 1824, may feel that with the Mass in C Beethoven was closer to Haydn than he was to his own tormented self in his later work.