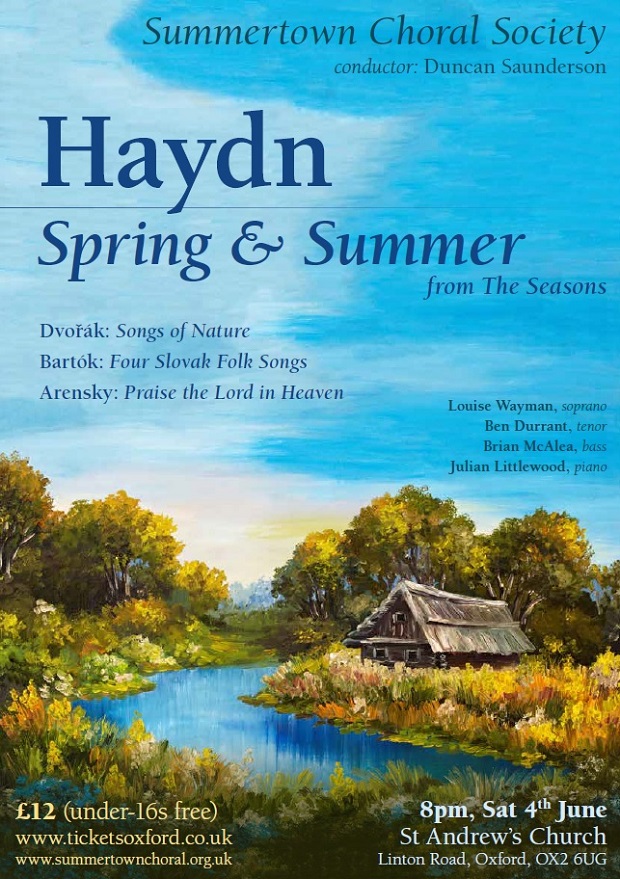 Haydn’s The Seasons, first performed in 1810, has a libretto based on a poem by the Scottish poet James Thomson. Composed at the age of seventy, the wonderfully exuberant and humorous music is Haydn at his best. A ploughman whistling the famous theme from Haydn’s ‘Surprise’ Symphony, a calling quail, chirping crickets and croaking frogs are all part of a beautiful outdoor musical tapestry describing two of the loveliest seasons.

The Hungarian twentieth century musical giant Béla Bartók wrote his Four Slovak Songs between 1910 and 1917. Like Vaughan Williams, he was passionate about collecting folk songs. After overhearing a Transylvanian nanny singing, he collected folk music across Eastern Europe and even in Algeria. There are two uplifting dancing songs, a hay making song and a curious wedding ‘lament’ about a girl sent to another country to marry a bad man. She comes back to her mother as a blackbird with a beautiful sad song.

Antonín Dvořák was hailed in Britain and the USA. He was influenced by the folk music of Moravia and Bohemia. His Songs of Nature are rustic but highly sophisticated and describe evening bells ringing, new life in the rye fields, songs coming from us like the early morning dew, and people in cities longing for nature.

‘Praise the Lord in Heaven’ is by the late nineteenth century Russian composer Anton Arensky, who was influenced by Tchaikovsky and Rimsky-Korsakov. This short seven voice motet is strikingly beautiful. Arensky’s other claim to fame is having an Antarctic glacier named after him in 1987!