In Praise of Song: A Parry Anniversary Concert 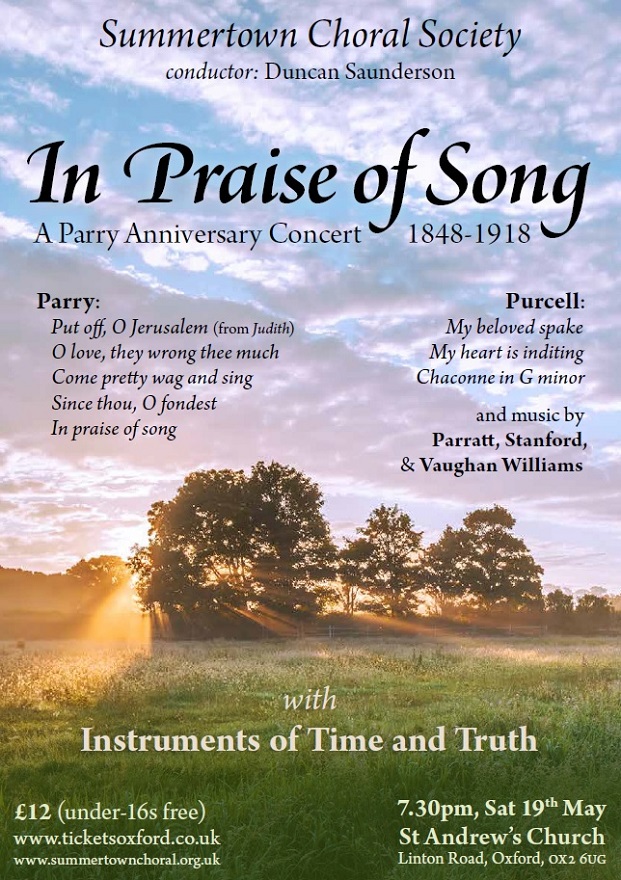 Parry: five part songs
Home of my heart
O love, they wrong thee much
Come pretty wag and sing
In praise of song
Since thou, O fondest

Walter Parratt: Tears for the good and true

Parry: Put off, O Jerusalem, the garment of thy mourning (final chorus from /Judith

Stanford: If ye then be risen with Christ

Purcell: My beloved spake, My Heart is Inditing, and Chaconne in G minor for strings

Born into East India Company wealth and educated at Eton and Oxford, Parry is commonly seen as an establishment figure. However, he was a humanist liberal, happier that his “Jerusalem” was used by the women’s suffrage movement than the patriotic “Right to Fight” movement of 1915.

All the part songs performed at this concert have an Oxford connection. One was written for a 1904 Oxford Festival and four were dedicated to Walter Parratt, who succeeded Parry as Heather Professor of Music at Oxford University. Parratt was also organist of Magdalen College Chapel, President of the Oxford University Chess Club and could play Bach’s forty-eight Preludes and Fugues from memory aged ten! Parry’s famous hymn “Repton” (“Dear Lord and Father”) started life as an alto solo in his wonderful oratorio Judith.

Vaughan Williams, one of Parry’s distinguished pupils, wrote his splendid Te Deum in G for the enthronement of Cosmo Lang as Archbishop of Canterbury in 1928. Purcell was appointed “Composer in Ordinary to the Violins” and his string music is sublime. These royal violins were modelled on the famous French court orchestra. Alongside the glorious “Chaconne”, “My Beloved Spake”, with its lovely references to Spring, must be one of his most delightful pieces. The magnificent coronation anthem “My Heart is Inditing”, with its eight soloists, is so harmonically interesting there is even an early use of the “Jimi Hendrix chord” more associated with blues and rock!

A few of Stanford’s forty-eight Preludes that were his homage to Bach completed this fascinating concert of English music. Stanford was an academic colleague of Parry’s and described him as the greatest English composer since Purcell.

Link to poster and programme