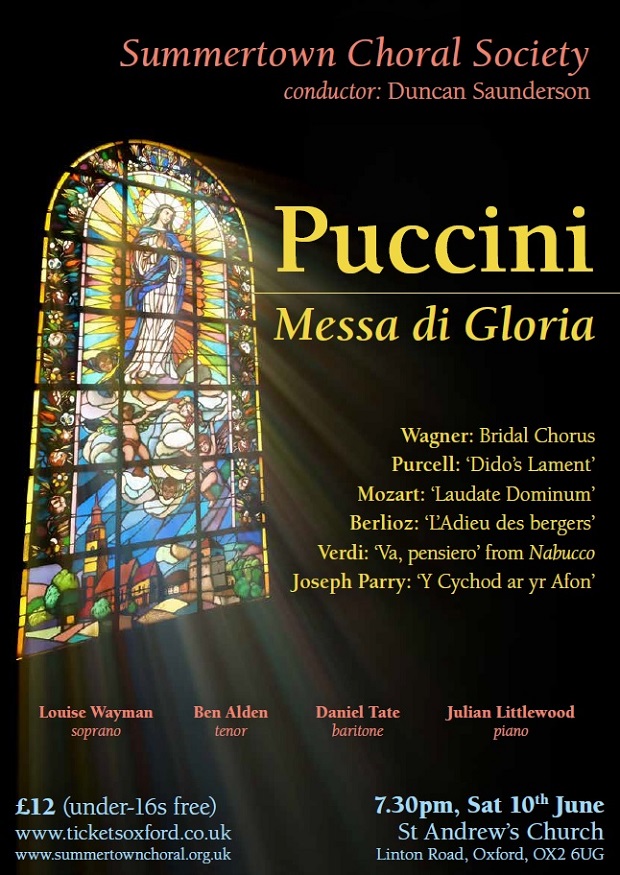 For our summer concert in 2017, Summertown Choral Society was joined by some of the finest young soloists in the country for an evening of music by operatic composers – an opportunity for the audience to close their eyes and think of La Scala, Milan, the Staatskapelle, Weimar, the Salle Herz, Paris, Salzburg Cathedral, or the valleys of Wales, and ponder Mozart’s line from a letter of 1782: ‘Opera to me comes before anything else.’

Puccini’s Messa di Gloria, composed as his graduation thesis when he was 18, was a resounding success with audience and critics alike. It is unashamedly operatic in parts, and Puccini even re-used some of its themes in his operas Manon Lescaut and Edgar.

Wagner’s ‘Bridal Chorus’ (Lohengrin) and Berlioz’s ‘L’Adieu des Bergers’ (L’Enfance du Christ), better known as a wedding organ voluntary and ‘The Shepherds’ Farewell’, will be performed in their original languages, along with Verdi’s ‘Va, Pensiero’ (Nabucco). Dido’s Lament and the following chorus ‘With drooping wings’ come from Dido and Aeneas, one of the earliest operas in English and Purcell’s only true opera. The three exquisite Mozart soprano solos with chorus come from Idomeneo, Vesperae solennes de confessore (K339), and the Coronation Mass (K317), the Agnus Dei of which has been described as the prototype of the Countess’s aria ‘Dove Sono’ from Le nozze di Figaro.

Having left school at the age of 9 unable to read or write, the extraordinary composer Joseph Parry eventually graduated from Cambridge with a doctorate and became the first Professor of Music at Aberystwyth University. He was also the first Welshman to write an opera. The programme for this concert included his ‘Y Cychod ar yr Afon’, sung in Welsh.