Scenes From the January 2004 Concert

The concert at St. Barnabas was one of the most successful ever given by the Society. This was in no small measure thanks to the presence of James Bowman, whose reputation ensured a lively interest in the event and a full-to-overflowing church on the night of the performance. But credit is due to the soloists, the orchestra, the conductor, and the choir, all of whom gave superb performances. Duncan showed off his versatility by performing the triple role of conductor, soloist in the Byrd Anthem, and flautist in the song Strike the Viol  by Purcell. 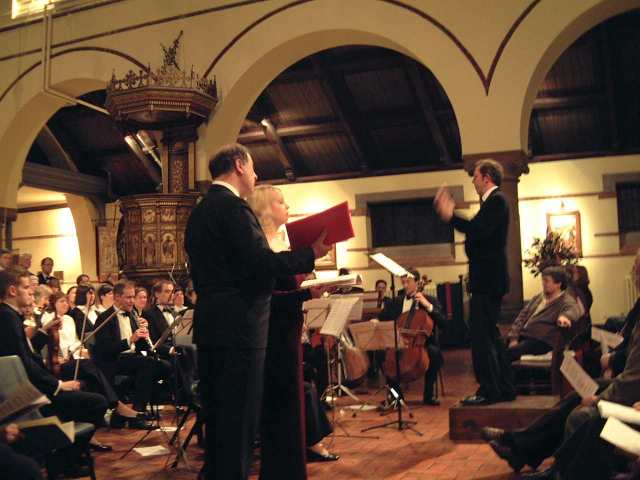 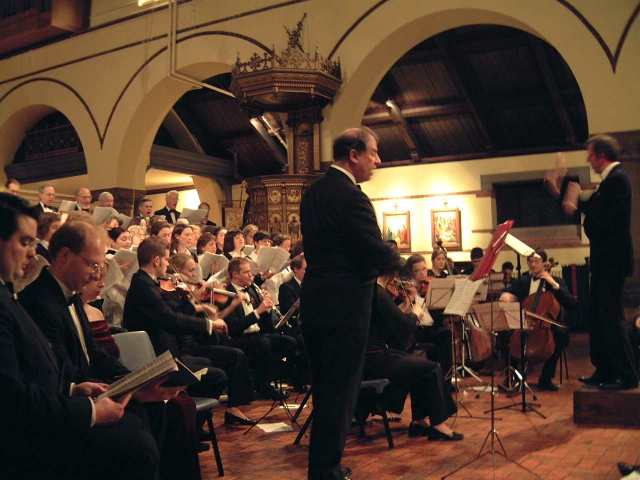 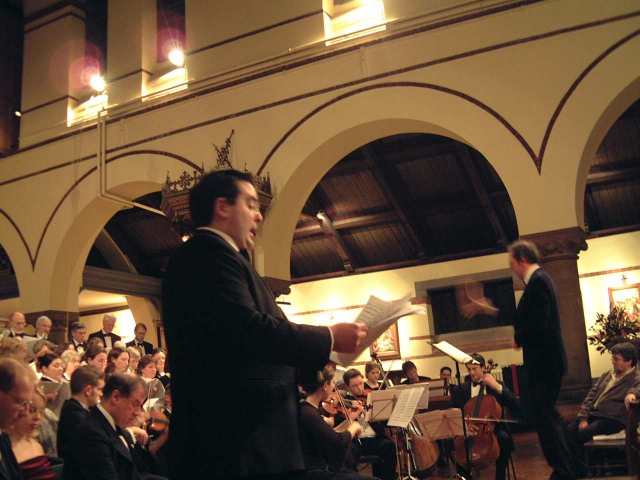 Below are a few pictures taken during the afternoon rehearsal, showing everyone in more informal attire, but still hard at work. 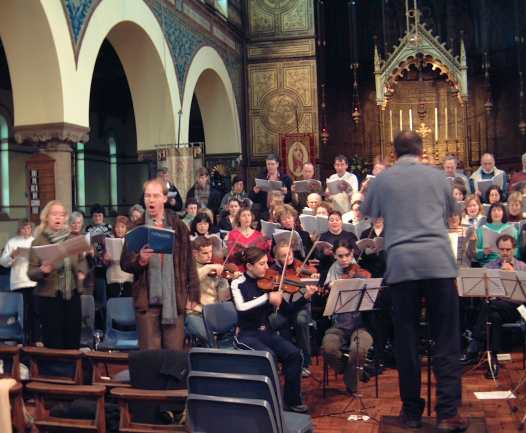 Both Henry Purcell (1659-1695) and George Frederic Handel (1685-1759) can perhaps be regarded as ‘composers laureate’. (The post of poet laureate already existed and in Dryden’s time was held by Nahum Tate, the librettist for Dryden’s opera, Dido and Aeneas.) Both men were regarded as the foremost composers of their day, their reputations made in the writing of both religious and secular music, particularly for the stage. Both received royal patronage, but it was on the basis of their popular reputations as much as royal patronage that they were called upon to compose music for royal and state ceremonial occasions.

Purcell was appointed ‘composer for the king’s violins’ in 1677, organist of Westminster Abbey in 1679 and of the Chapel Royal in 1682, and ‘keeper of the king’s wind and keyboard instruments’ in 1683. From about 1680 he began writing incidental music for the theatre and in the last years of his life from 1689 wrote five ‘dramatic operas’ (spoken dialogue linked by musical sequences) and the full opera Dido and Aeneas. The whole corpus of his instrumental, vocal and choral music was prodigious. With the arrival of William and Mary on the throne in 1689 royal patronage of music declined, but Purcell, by then established as the finest English composer of his day, continued to be called upon for many formal ceremonial and religious occasions.

Handel entered court circles when he was appointed in 1710 to the post of Kapellmeister at the court of the Elector of Hanover, who in 1714 became King of England as George I. Handel moved to London in 1713, where he was already known as a composer of Italian opera, a reputation built up during four years in Italy before his appointment to the court of Hanover. In 1723 he was granted a stipend as Composer of Music at the Chapel Royal, and in 1727 he became an Englishman by Act of Parliament. In addition to the church music written in his official capacity at the Chapel Royal and many vocal and instrumental compositions, his main business during the 1720s and 1730s was the promotion of Italian opera on the London stage. But the popularity of this declined and, after several artistic and financial failures, he turned to a form of musical drama which enhanced his popularity yet more and for which he is now best known, the English oratorio.

William Byrd (1543-1623) also received the royal patronage, being appointed by Queen Elisabeth in 1572 jointly with Thomas Tallis to the post of organist at the Chapel Royal, after nine years as organist of Lincoln cathedral. His writing included secular music, madrigals, songs and instrumental works for strings, but his reputation both then and now rests primarily on the beauty and power of his church music.

George I died in 1727 and Handel, known personally to the new King and his Queen, was commissioned to write four new anthems for the coronation service. The four, namely the two in our programme tonight, My heart is inditing and The King shall rejoice, Let thy hand be strengthened and Zadok the Priest, which has been sung at every coronation service since 1727, were written to stand alone and for no especial occasion in the service. It appears that in the event all did not go smoothly. A contemporary account by the Archbishop of Canterbury records of The King shall rejoice ‘The Anthem in Confusion: All irregular in the Music’. Other works by Purcell and Orlando Gibbon were included, but Handel’s anthems confirmed him as a leading composer of ceremonial church music.

My heart is inditing

This anthem was sung at the moment of the Queen’s coronation after the coronation and enthronement of the King. It is in four sections with the text taken from Psalm 45 and the book of Isaiah:

My heart is inditing of a good matter

Kings’ daughters were among thy honourable women

Upon thy right hand did stand the Queen

Ode for the Birthday of Queen Anne

The practice of marking royal birthdays with musical celebrations was customary in Purcell’s time and continued until the late 18 th century and the reign of George III. One of Handel’s early commissions after his move to London was to compose an ode for the 48 th birthday of Queen Anne in 1713, the year before she died. The ode also celebrated the signing in 1713 of the Treaty of Utrecht which ended 11 years of war against France and Spain. The words, written by a contemporary playwright, one Ambrose Philips, appear to us now, though no doubt not so at the time, as mindless banality, but Handel has produced in a piece of barely 30 minutes duration a work of musical richness and imagination. It has nine movements with a refrain, celebrating both the royal birthday and the Peace of Utrecht, which provides the text for two of the movements and ends five of the seven other stanzas:

Who fix’d a lasting peace on earth.

The variety of settings for this refrain and their contrast with the preceding music in each stanza is one of the delights of the work. Much of the solo writing is given to the alto or counter-tenor.

The King shall rejoice

This anthem was sung at the formal recognition of the King soon after the start of the coronation service. It also has four sections, written for choir only, with the text taken from Psalm 21:

The King shall rejoice in thy strength, O Lord

Exceeding glad shall he be of thy salvation

Glory and worship hast thou laid upon him

This is one of the many anthems Byrd wrote during his tenure at the Chapel Royal, and his regarded as one of his finest. It is scored for soprano, tenor, bass and two alto parts, and is sung this evening by our soloists. Composers in the time of Byrd, writing music for cathedral services and religious occasions, did not distinguish between a single voice to each part and a choir with several voices to a part. This was to come later, particularly as Bach and Handel developed a more dramatic style of musical writing, contrasting solo roles with roles played or comments offered by a chorus.

Among the ceremonial occasions for which Purcell continued to write after the departure of the Stuarts in 1688 were royal birthdays, particularly those of Queen Mary who was considerably more popular among their subjects than was her husband. Come Ye Sons of Art, the sixth of such odes composed by Purcell, was written for her 33 rd birthday in 1694. (She died of small-pox in December of that year.) The author of the words is not known, but as with the Ode for the Birthday of Queen Anne, to our ears at least they are singularly unmemorable and uninspiring. It is Purcell’s music which makes this a work of celebration, with vigorous writing particularly for the counter-tenor duet in the third movement, for trumpet, and for oboe, which joins the soprano in a duet in the seventh movement. There are nine movements:

5 Strike the viol, touch the lute