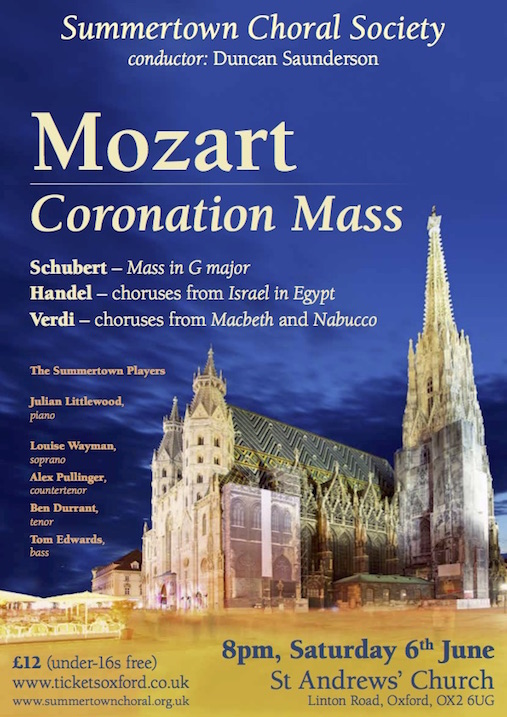 Verdi: Chorus of the Hebrew Slaves

Summertown Choral Society’s Summer concert included two popular masses, as well as Handel and Verdi choruses. The Krönungsmesse (Coronation Mass in C Major, KV 317), was so called because it was first performed either for Francis I of Austria or Leopold II in Prague, is one of the most popular of Mozart’s 17 Mass settings, composed in 1779. It is famous for the Agnus Dei, one of Mozart’s most sublime sacred soprano solos. Schubert’s Mass in G was written in a week at the age of 18. His genius for melody, through simplicity, is evident and the Mass has become one of his most popular sacred works.

Handel’s Israel in Egypt, by contrast, is a mature work. The choir sang the extraordinarily graphic plague sequence of frogs, insects and darkness visited upon the Egyptians for their treatment of the Israelites in Egypt. Despite the subject, the music is Handel at his most uplifting and majestic. Verdi’s Chorus of the Hebrew Slaves from Nabucco and Chorus of Scottish Refugees from Macbeth are two of his most beautiful and enduring short works. Both have the theme of the plight of an oppressed country and its people.

“…that was one of the best concerts we have been to – including Oxford Phil with Ashkenazy on Friday! Many thanks…I particularly enjoyed the two Masses & Va Pensiero.”