THE PROGRAMME CAN BE DOWNLOADED BY CLICKING HERE

TICKETS (£15.00, under 16s free of charge but need a ticket) are available from TicketsOxford or via a choir member. 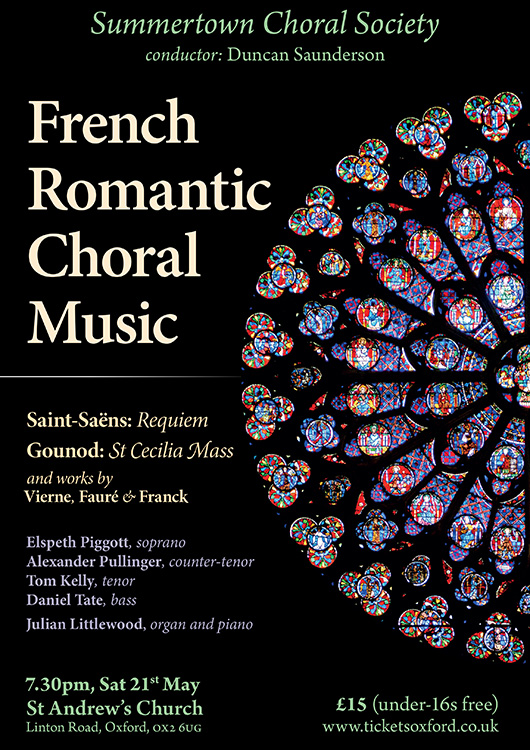 Paris in the late 19th and early 20th century was a golden age of music. Many of the greatest French composers were outstanding organists: Fauré and Saint-Saëns worked at L’église de la Madeleine; Vierne was assistant to Charles-Marie Widor at Saint-Sulpice before becoming organist of Notre-Dame de Paris; and the honorary Frenchman, César Franck (born in present day Belgium), was organist at the Basilica of Sainte Clotilde.

Camille Saint-Saëns was a child prodigy who grew to be acclaimed in his lifetime as the incarnation of French genius. He was a virtuoso pianist, and declared by Liszt to be the world’s greatest organist. Writing about the Requiem, his biographer Jacques Bonnaure noted in his 2010 book: `This unjustly neglected Requiem is perhaps the most sensitive, imaginative, and perfect work by the composer, who finds here, more than ever before, a classical balance between form and expression, innovation and tradition, sophisticated compositional style and immediate effect’.

The great Debussy wrote that Gounod represented the essential French sensibility of his time, and Saint-Saëns regarded his St. Cecilia Mass as one of Gounod’s finest works, writing this after the premiere in 1855:
`The appearance of the Messe Sainte-Cécile caused a kind of shock. This simplicity, this grandeur, this serene light which rose before the musical world like a breaking dawn, troubled people enormously. … at first one was dazzled, then charmed, then conquered.’

Along with Fauré’s Cantique and Franck’s Panis Angelicus, this Parisian programme of French music at its best, with its luscious, almost impressionistic harmonies, beautiful soaring vocal lines and dazzling organ writing, will be a joy to hear!

Covid arrangements: Audience members are encouraged to wear a mask. The church will be ventilated during the concert. Please do not attend if you have Covid or any similar symptoms. There will be no requirement for a LFD test.